An accounting major in his first two years of college, Mohamed could have gone into corporate or tax law. What he saw on the streets of Washington, D.C., and learned in a Constitutional law class on civil liberties changed that.

A. Rafik Mohamed didn’t start out with a career in higher education as his life’s work. Now the dean of the College of Social and Behavioral Sciences at Cal State San Bernardino, he began his undergrad years at George Washington University as an accounting major, with sights set on law school and a job in corporate or tax law.

But this was also during the early 1990s, the height of the war on drugs, and in his hometown of Washington, D.C., crime and crack cocaine were rampant in the streets. Mohamed saw first-hand the effect aggressive policing was having on the community. He also took a Constitutional law class focusing on civil liberties, and, he said, “I learned stuff in there that was helping me make sense of stuff that was going on outside.”

He also learned of how it played in the history of race relations in America, having heard how his mother and grandmother dealt with the Jim Crow segregation laws that stretched from Reconstruction until the 1960s. And what he saw was the inequity in the way laws were applied to people of color, primarily to Black Americans.

“I’m seeing young, Black boys and men being treated like they’re going to prison for 20 years for an ounce of weed,” Mohamed recalled. “And there were drugs all over my campus. To see how hands-off the approach to relatively privileged college kids was, compared to Black kids in D.C. being so different for the same thing, and then taking this Con-law class, and taking in the history of the law in that way, made me think I needed to study something different.”

After two years on a track to become an accountant, he switched and declared as a sociology and criminal justice major. “So this wasn’t my plan. Corporate law and accountancy was my plan. Thank God, that didn’t happen,” he said with a laugh. 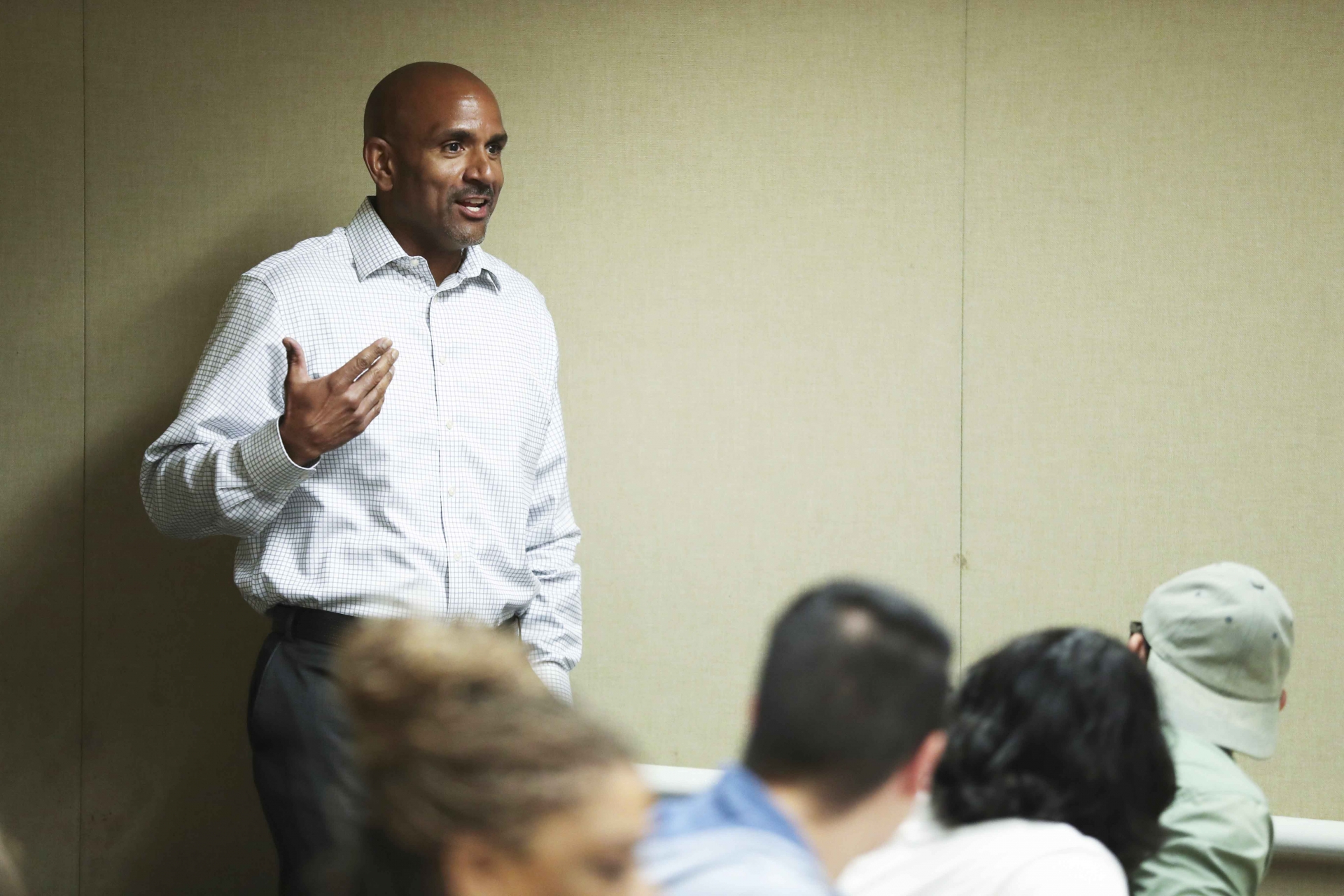 In 2015, he came to CSUSB to lead the College of Social and Behavioral Sciences, the home to the disciplines of anthropology, criminal justice, economics, geography and environmental studies, history, political science, psychology, social work and sociology. Remarking on the caliber of faculty in the college, Mohamed said many could join top-tier research institutions if they wanted to. Many of them have received recognition from the top professional organizations in their fields. As dean, he sees it as part of his job to create opportunities for the faculty to be successful as teachers and scholars, whether it’s at CSUSB or another institution if they choose to leave. At the same time, he is also creating an environment that compels them to stay.

“They love working at CSUSB,” he said. “We have wonderful students on our campus. And the joy and fulfillment our faculty get from working with our students is also what keeps them here.”

Getting to the point of leading faculty and students involved a few detours for Mohamed. While corporate or tax law were no longer in the picture, a career in studying drug policy – specifically the inequality in such laws – became Mohamed’s focus. “I wanted to be in a position to bring more sense to domestic drug policy, because I saw the impact it was having on communities of color, in particular.”

Then he began teaching while in grad school, which he said “gave me a feeling of purpose like I never had.” At the University of San Diego, he found “a place where I could be in the classroom, work directly with students and really kind of help them find their way.”

One such student was Erik D. Fritsvold, who took one of Mohamed’s classes early in his career at the University of San Diego. He recalled talking about domestic drug polices and his personal observations of how such policies played out in the real world – that in his undergraduate days, he knew of students whose parents paid for their college education, “and they were full-time drug dealers. And everybody knew it. People would be wheeled out of the building from ODing, and nobody did anything about it.”

Fritsvold took a deep interest in the topic. By the time the student went to UC Irvine for grad school, he and Mohamed talked about what Fritsvold was seeing himself and compared experiences. What began as a helping hand with Fritsvold’s master’s thesis became the book they co-authored, “Dorm Room Dealers: Drugs and the Privileges of Race and Class.”

“We both had experience where we had seen different populations treated differently, based on socioeconomic status, race,” Mohamed said. Also, when the book was published, attention had moved from the metaphorical war on drugs, with its mandatory sentencing laws, to the war on terror under the George W. Bush administration. Yet people were still being sentenced to long prison terms because there was no drug policy reform. “And that’s where ‘Dorm Room Dealers’ came from.” 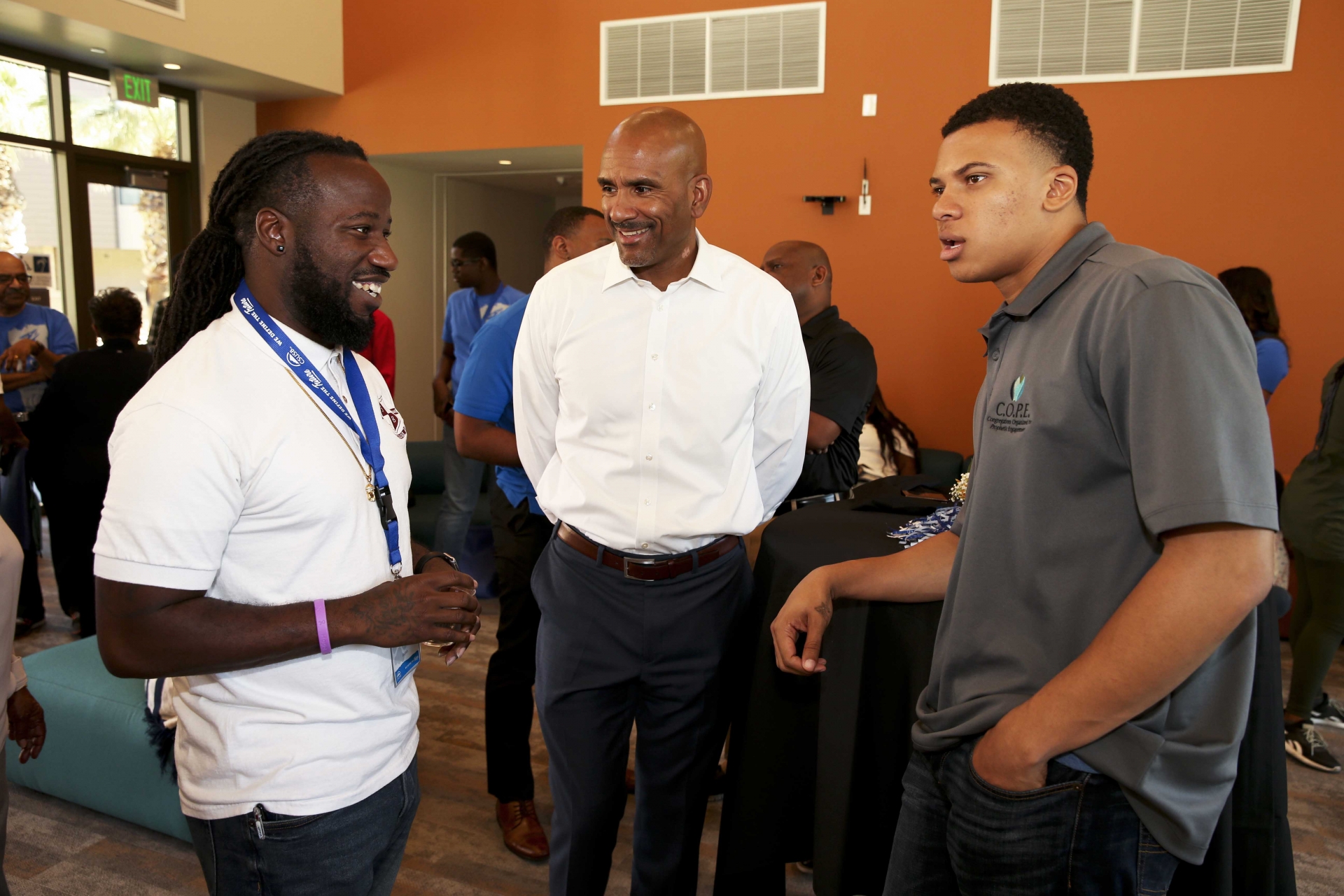 Also while at USD, Mohamed was appointed department chair once he made tenure, though administration wasn’t something he had in mind. Yet, just like teaching, he soon learned that he liked working with faculty, and new faculty in particular, helping them find their way professionally. Had it not been for the COVID-19 pandemic, which led to budget cuts not just at CSUSB but other institutions nationwide, the College of Social and Behavioral Sciences would have embarked on a program aimed at generating creative ways to support faculty research.

As the world navigates through the pandemic, Mohamed was asked whether the college, with its disciplines that touch so many aspects of people’s everyday lives – such as law and order, economics, mental health – could play a role in helping at least the campus community, if not the broader community, find its way.

Looking at questions, for example, of why communities of color are disproportionally impacted by the pandemic from economic, mental health, psychological perspectives are issues the college is equipped to tackle, he said. And, just like drug policies have vestiges of racial and social injustice from the past, many of these challenges faced today aren’t new.

For example, someone once remarked to him about how segments that voted for former President Donald Trump did so because they felt the government didn’t represent them anymore. Mohamed said Black and brown Americans have felt that exact same way for many years.

“My only thought is that should lead you to empathize with others, not vilify them,” he said. “And what I have seen since the election, and what I expect to continue to see is continued vilification, and the lack of empathy for people that legitimately feel disenfranchised. But they don’t see that Black and brown people feel the same way. …

“We don’t have a future as a country unless we figure these things out, unless we look at how these centuries old issues still shape what happens today,” Mohamed said. “I think the College of Social and Behavioral Sciences plays a critical role in us not just preparing students by awarding degrees, but really, leading the conversation of what it means to live in this world now, what it means to graduate, go out into society and make sense of it all.”

He also cautioned that conversations on race and social justice and reaching solutions should not just be relegated to social science disciplines. These challenges are much bigger than that and require broad participation to work toward solutions.

“It should be everybody’s work,” Mohamed said.

May 9, 2022 Psychology professor surprised with CSUSB top faculty award
April 12, 2021 The fight for justice in the Jim Crow South by a freed slave and a Confederate soldier topic of program
October 15, 2020 Faculty in the News, Oct. 15
View All News