Modern China Lecture Series resumes via Zoom on May 26

Modern China Lecture Series resumes via Zoom on May 26

The role of traditional culture and cultural reform in Maoist China will be the topic of the next Modern China Lecture presented by Maggie Greene, assistant professor of history at Montana State University.

The next Modern China Lecture will be presented virtually and feature a presentation, “Resisting Spirits: Drama Reform and Cultural Transformation in the People’s Republic of China,” by Maggie Greene, assistant professor of history from Montana State University.

In this talk, Greene will discuss her recent monograph, a study of the role of traditional culture and cultural reform in Maoist China. Combining archival documents with a variety of rare manuscript materials, “Resisting Spirit” explores the debates over the role of traditional Chinese theatre (xiqu), particularly the celebrated genre of ghost opera.

Challenging perceptions of what cultural production in the high socialist period looked like, “Resisting Spirits” shows the lengths to which artists and writers went in trying to reform beloved popular culture for new political contexts, as well as the political ramifications of artistic experimentation and debate. Greene also shows how integral the debate over ghosts was to shifting political tides, particularly the lead-up to the Cultural Revolution. Greene will also discuss the relevance of Mao-era cultural regulation and reform to the contemporary People’s Republic of China.

Greene is the author of “Resisting Sprits: Drama Reform and Cultural Transformation in the People’s Republic of China” (University of Michigan Press, 2019). Her research explores cultural transformation in China across time and space, and the relationship of cultural production to politics. She has published articles on subjects ranging from opera, to mahjong in the late Qing and Republican periods, to the cultural and political “performance” of Chinese expeditions to Mt. Everest in the high socialist period. Her second project considers the role of global popular culture, from American children’s books to Japanese videogames, in post-Mao China, and the ways in which cultural workers and fans have reworked and reused global pop culture within a Chinese context.

The series cosponsors are the CSUSB Department of History, the Department of Economics, the History Club/Phi Alpha Theta, the College of Social and Behavioral Sciences, the College of Extended and Global Education, the Center for Global Management/Jack H. Brown College of Business and Public Administration, John M. Pfau Library, and Margaret Hill and the World Affairs Council of Inland Southern California. 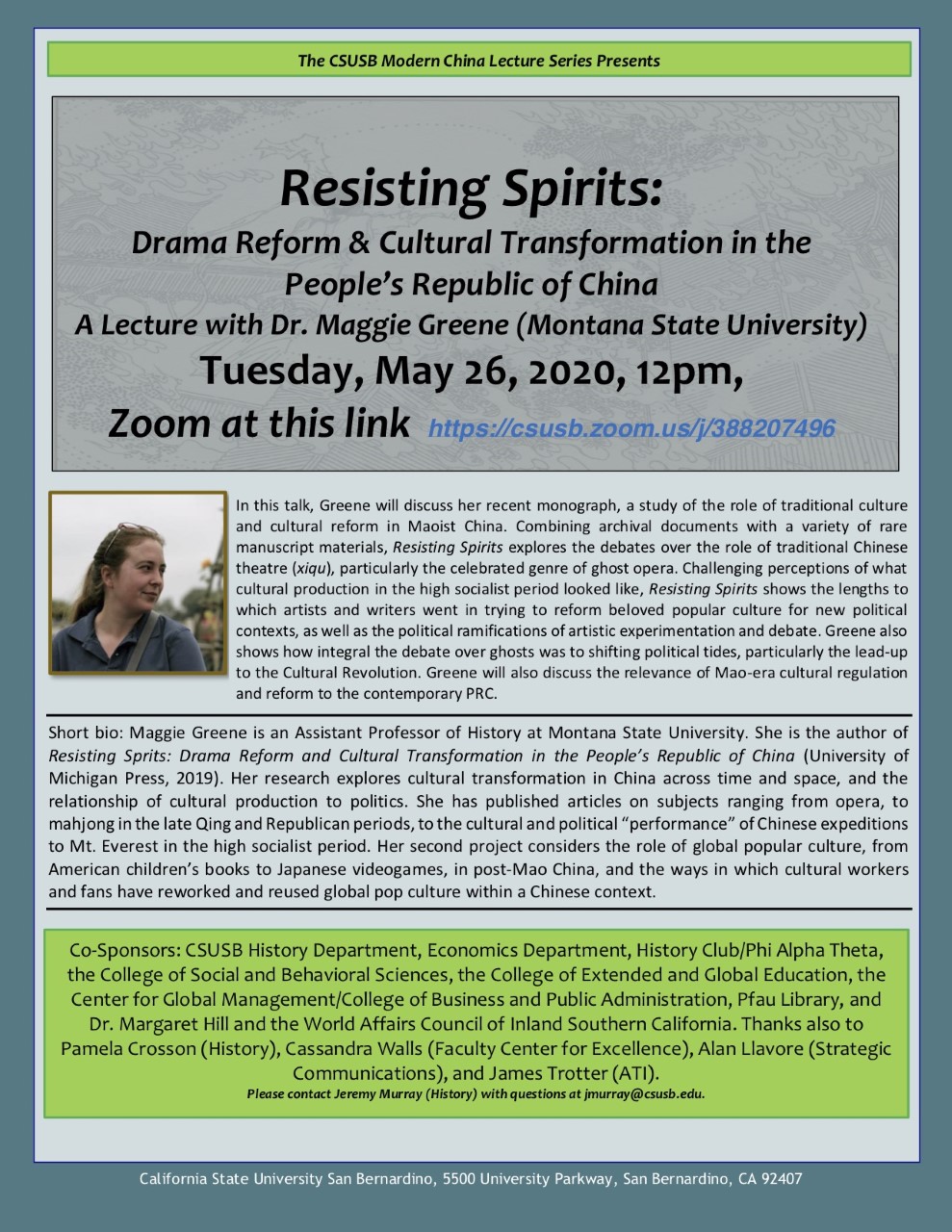