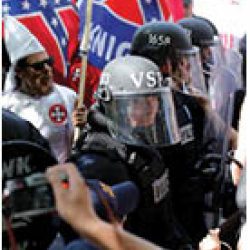 Professor Vida Johnson, prior to joining Georgetown University Law Center, was a supervising attorney in the Trial Division at the Public Defender Service for the District of Columbia (PDS), where she worked for eight years.  At PDS, she was assigned to the most serious cases at the “Felony One” level, and her experience included numerous trials in D.C. Superior Court representing indigent clients facing charges including homicide, sexual assault, and armed offenses. Her responsibilities at PDS also included supervising other trial attorneys and serving as one of the agency’s two representatives to the D.C. Superior Court Sentencing Guidelines Commission. In 2009, she was a Visiting Associate Professor in the Juvenile Justice Clinic at Georgetown University Law Center. Before joining PDS, she was an E. Barrett Prettyman fellow at Georgetown University Law Center. As a fellow, she represented indigent adults in the D.C. Superior Court and supervised students in the Criminal Justice Clinic. Ms. Johnson earned her law degree from New York University Law School in 2000 and a B.A. in American History from the University of California, Berkeley in 1995.


Michael German is a fellow with the Brennan Center for Justice’s Liberty & National Security Program, which seeks to ensure that the U.S. government respects human rights and fundamental freedoms in conducting the fight against terrorism. A former special agent with the Federal Bureau of Investigation, his work focuses on law enforcement and intelligence oversight and reform. He joined the Brennan Center in 2014.

German was an FBI special agent for 16 years, specializing in domestic terrorism and covert operations. He left the FBI in 2004 after reporting continuing deficiencies in FBI counterterrorism operations to Congress. He served as an adjunct professor of law enforcement and terrorism at National Defense University School for National Security Executive Education from 2006-2007 and as policy counsel for national security at the American Civil Liberties Union from 2006-2014. German is the author of two books, Disrupt, Discredit, and Divide: How the New FBI Damages Democracy (The New Press, 2019) and Thinking Like a Terrorist: Insights of a Former FBI Undercover Agent (Potomac Books, Inc., 2007).  He is a graduate of Wake Forest University and Northwestern University Law School.

Sam Levin is an American journalist based in Los Angeles, California, where serves as LA correspondent forThe Guardian.  He reports on breaking news, technology, politics, labor, the environment, criminal justice, housing, immigration, and a range of other topics relevant to California and the west.

Levin graduated from Columbia University in 2012 with a Bachelor's degree in Urban Studies.

KKK in the PD: White Supremacist Police and What to Do about It https://law.lclark.edu/live/files/28080-lcb231article2johnsonpdf

"White supremacists and militias have infiltrated police across US, report says" https://www.theguardian.com/us-news/2020/aug/27/white-supremacists-militias-infiltrate-us-police-report

"The FBI warned for years that police are cozy with the far right. Is no one listening?" 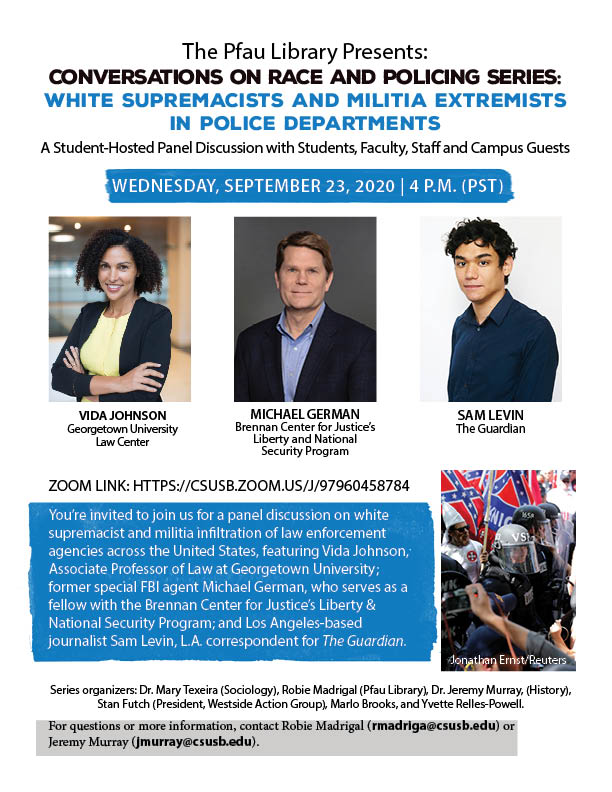