California State University, San Bernardino has a rich 50-plus year history that includes a fast increase in enrollment from 230 to over 20,000 students. Many campus traditions and landmarks have been established as a result of our fast expansion. Students who wish to make a difference and create new traditions should join the Associate Student's Incorporated, the student body's voice. Traditions at CSUSB convey the tale of the university's legacy, commemorate its past, and unite generations of Coyotes in a common experience that transcends time, culture, and trends.

“San Bernardino, Our Alma Mater” originally was composed by Dr. Loren Filbeck (professor emeritus of music) in 1988 and debuted on October 27, 1990, at the university’s Silver Anniversary Gala. Today, it is a campus tradition for the graduating class to sing the alma mater at the close of the commencement ceremonies.

Ask Me Campaign
Black and Blue

Originally adopted by a student vote in 1966 the official colors of CSUSB were brown and light blue to reflect the mountains and sky that makeup the campus' backdrop. In 1996, the administrative council changed the school colors to black and blue and in 2008 we adopted "Coyote Blue" as the official name to our shade of blue!

Coyote Cares Day brings together CSUSB students, faculty, staff and alumni to volunteer will each year, to complete a day of volunteer service in local communities that benefit local nonprofit organizations and community agencies as a way of thanking the community for its support of the university and its mission.

A celebration for the end of the school year; our annual Coyote Fest is an end-of-the-year party with carnival games, rides, interactive activities, and live entertainment from both alumni and current CSUSB students! This is event is free for all CSUSB students, faculty, staff and community members of all ages!

In 1984, after years of unofficially having a St. Bernard as a mascot, students took to the polls and voted to name the Coyote as the official mascot. More than 10 different animals were on the ballot, including the badger, golden condor, conquistador, jaguar, owl, phoenix, puma, vaquero, and the St. Bernard; the coyote won convincingly.

Homecoming is a celebration of Coyote pride and spirit. Students, faculty, staff, and alumni of CSUSB come together to breathe black and blue. Our Homecoming is jam-packed with traditional events, competitions and activities and is unique in that our homecoming game is not a traditional Football game but a women's Volleyball game! #GoYotes!

Howl at the Moon
Late Night at the Rec

Late Night at the Rec is an annual tradition that takes place at the start of the Fall semester at the Recreation and Wellness Center. This tradition allows students to learn about the different clubs and organizations available at CSUSB. Prizes, food, and games galore!

A tradition started with the installation of Wild Song; a bronze sculpture of a coyote at the west entrance of the Santos Manuel Student Union - South. This tradition calls for rubbing Wild Song's paw for good luck during midterms and final exams!

Summer Movies on the Lawn

Summer Movies on the Lawn is an annual event held on the lawn of the John M. Pfau Library. The annual summer series, which is free to the public, showcases a variety of blockbuster films. Students, alumni, faculty, and staff enjoy concessions, and moviegoers bring blankets and lawn chairs to enjoy their movie experience.

Wednesdays in July mark the start of the annual Summer Wednesdays concert series at Cal State San Bernardino. Musical styles ranging from Latin dance to vintage rock 'n' roll to rhythm and blues to 1980s and '90s favorites are showcased every Wednesday in the Summer. The music is usually held on the Lower Santos Manuel Student Union - East patio area, and free to the public and local community. 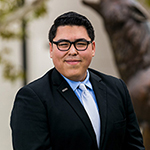