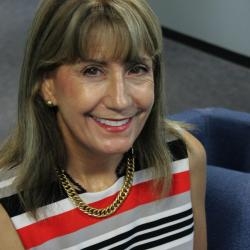 Dr. Seitz is a professor and Chair of the Marketing Department at California State University, San Bernardino.   She is the author of five books: Power Dressing, Your Executive Image, and I Don’t Wear A Suit as well as two books on advertising and public relations published in Romania with Mariana Nicolae (2006), “Crearea Imaginii (Image Making)(2008) and Cheia Succesului Imaginea Profesionala (Your Key to a Successful Professional Image).

She received her Master’s and PhD from Oklahoma State University.  Prior to teaching she was a fashion coordinator for Burdines Department Stores in Florida and in retail management for Saks Fifth Avenue in Phoenix, Arizona.  Dr. Seitz has been a guest on numerous radio and TV talk shows both in the US and Canada and has been quoted in newspapers across the country including the Los Angeles Times, Investor’s Business Daily, Business Week, and the Kansas City Star.  She has written hundreds of articles for academic, trade and popular magazines and has made presentations at national and international association conferences.

Dr. Seitz received a Fulbright Senior Fellowship award in 2002 and two Fulbright Specialist Awards in 2006 and 2008 in Romania conducting research and teaching on advertising and marketing. Additionally, Dr. Seitz has consulted with companies on issues dealing with image marketing and advertising. Some of her clients have included the US Armed Forces, Accountant Overload, General Dynamics, Texas Instrument, Abbot Laboratories, Yellow Freight Systems, and The YMCA