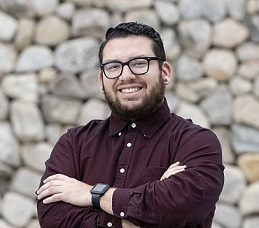 Castillo’s thesis, Ages of Prehistoric Earthquakes on the Banning Strand of the San Andreas Fault, Near North Palm Springs, California broke new ground in the field of earthquake geology. Written for his MS in Earth and Environmental Sciences, his study focuses on measuring prehistoric earthquakes on the Banning strand, one of three subparallel strands of the San Andreas Fault located within the northern Coachella Valley. His work documented eight prehistoric earthquakes in the past 7000 years, providing the first published data on the Banning strand. In his thesis, he estimates that the average interval between the five most recent events is 640 years, “indicating that this strand is overdue for a large earthquake.” His results will be used by other scientists to update seismic hazard models for southern California.

Castillo’s interest in earthquake geology began with a geology course at Cal State Northridge. After earning his B.S. in Geology, his mentor, Dr. Doug Yule, encouraged him to continue his studies under the guidance of Sally McGill at CSUSB.

“Dr. Yule encouraged me to attend graduate school to expand my experience, and recommended Sally McGill at CSUSB. She was one of the primary people I wanted to work with; she’s one of the top geologists and seismologists in Southern California. I met with her when I was exploring schools, and when she told me the San Andreas Fault ran right behind the school, I was ready to sign up!”

Castillo has presented his work at a number of professional conferences, including the Geological Society of America and the American Geophysical Union. He is currently working on publishing his research in a peer-reviewed journal. His work was funded by the U.S. Geological Survey. He now serves as an instructor at CSUSB.

“I love teaching – it’s a fantastic experience. Ultimately, I plan to go back to school to get a Ph.D. and continue to teach and do research at a university.”

Castillo's thesis is available on CSUSB ScholarWorks. We look forward to hearing more about his achievements in the coming years. 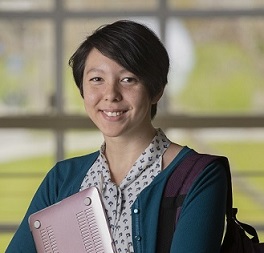 Muller is the author of author of Neurological Correlates of the Dunning-Kruger Effect, written for her Master of Arts in Psychological Science. Her thesis explores the neurological basis for the Dunning-Kruger effect - the tendency for low performers to overestimate their performance on a cognitive task and for high performers to underestimate their performance – by measuring human brain waves.  Her study involved asking her research participants to take a set of memory tests and estimate their own performance while connected to an EEG machine that measured two memory processes called familiarity and recollection. Familiarity generates memories that are general and lack details, while recollection produces clear memories that include specific details. She was then tasked with interpreting the results.

In his letter of support, committee chair Dr. Rick Addante described Muller’s thesis as “a bold endeavor better suited to a Ph.D.-level student.” The study required her to undertake extensive research on electrophysiology of the Dunning-Kruger Effect, a subject area new to her. As Dr. Addante describes it, “I asked her to synthesize a highly disparate and interdisciplinary literature ranging from neurophysiology to metacognition and social psychology - using physiological methods to directly address a core question that has riddled the likes of Socrates, Confucius, Shakespeare, and Darwin.”  Muller proved herself up to the task, and produced a work that shows that the over- and under-estimations of low and high performing individuals correspond to distinct patterns of neurological activity, familiarity and recognition. It is the first published work to do so.

After earning more than 20 awards for scholarship during her time at CSUSB, Muller is now pursuing a Ph.D. in psychology at the University of Arizona. She hopes to join the faculty of a university where she can teach and conduct her own research – possibly at CSUSB.  “I found a passion for teaching during my time at CSUSB,” she notes. “I would love to come back to teach there to try to give other students the opportunities that CSUSB gave me.”

Both Castillo and Muller made original contributions that were first in their fields – a remarkable achievement for any master’s thesis. As the Outstanding Thesis Award recipients, they were recognized at the Graduate Education Week welcome brunch and awarded a check for $500. Graduate Studies extends its hearty congratulations to both recipients for their exceptional achievements!