On Oct. 31, Kyle Finck of The Los Angeles Times spoke with Coyote Chronicle student journalists about multimedia storytelling and ways in which independent student media can acquire an edge. Finck met with the editorial staff first at 3 p.m. in the Coyote Chronicle newsroom. The topics he discussed were getting to know the staff and offering any helpful advice regarding the process of putting together a weekly publication that he learned while being Editor-in-Chief of the Middlebury College newspaper when he was a university student. At 4 p.m., Finck then visited the COMM 243A newspaper production practicum course consisting of Coyote Chronicle staff writers. Students were given advice on how to better craft a news article and to find a passion in their voice as writers. It was also announced that all the staff members of the Coyote Chronicle would receive a free digital subscription to The LA Times.  Finck is the section lead of High School Insider--a user-generated content platform of the newspaper that consists of over 225 high schools and 2,000 students publishing stories. Over 3,300 stories have been published on High School Insider by both high school and college students since its launch in November 2014. Finck’s visit is part of the Times’ ongoing investment in youth journalism initiatives in San Bernardino that include a seed grant to launch a Community News Section of the Chronicle and support El Cajon High School’s involvement in High School Insider. This collaboration was brought about in the wake of The Times' coverage of the December 2015 terrorist attack in San Bernardino, which earned them a Pulitzer Prize. To encourage public service through journalism and to honor the victims, The Times donated the 10,000 dollar prize to help launch a community news section in the Coyote Chronicle. The Los Angeles Times first collaborated with the Coyote Chronicle in the winter quarter of 2017, when the Community Journalism Reporting Initiative was created on Jan. 9. This produced a new community section of the newspaper that allowed the young journalists to cover important issues across the Inland Empire. '[Kyle] encouraged us to continue writing about the topics we are passionate about and to pursue our goals even when they seem so far away,' stated Coyote Chronicle managing editor Andrea Engelhorn. 'He reminded us to ask ourselves every day, 'why am I here? What is my purpose?'' 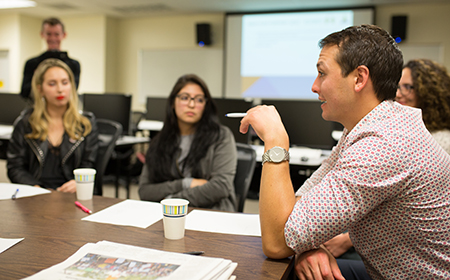